Reviewer: CEK - favoritefavoritefavoritefavoritefavorite - September 10, 2012
Subject: I choked Mike Gordon before this show
I was on one. I had been on a big Disco Biscuits kick, I saw Gordon outside and ran up to him. Grabbed him around his throat while screaming "Give Me All Your Fucking Money!" until my girlfriend grabbed me by the head and dragged me away.

So thank me. Thank me. For the role my belligerence played in this wonderful evening of music. Sometimes you just have to dumb out and force the hand of paranoid greatness.
Reviewer: patobrocks - favoritefavoritefavoritefavoritefavorite - October 19, 2010
Subject: Great energy
First off, the recording is stellar, none better.

I can't explain how good this show is, and thanks to Live Archive the show is not a was, but a is.

I wasn't at the recording of this show, but I am here often.

download this crunchy show now!
Reviewer: medeski7 - favoritefavoritefavoritefavoritefavorite - February 8, 2006
Subject: Congratulations Brett and Craft.
This show was unbelievable. My buddy proposed to his fiance after finding out Mike was coming to town. At the show Mike made himself accessable by the coat rack, so we asked him to play Lengthwise. He just smiled and gave no reply.
They played the most face melting second set after a nice jammin set for a first set. And of course a Lengthwise for Brett and Craft.
Get this show, it is so killer. I didn't mind the passin' me bye either. I dig that tune.


From the moment the first notes off Theme From The Bottom hit the air after Marco's little Phish speech, everyone there knew it was going to be an insane night. COnstant Foam teases throughout the first set. You knew that they were gettign ready to drop some heavy shit in the second set. I mean really, Lengthwise teases into an incredible Foam (short breather) THOSE FIRST NOTES OF YEM! I almost went out of my mind. I think that looking out over the balcony at all the kids danicng to You Enjoy Myself aroudn 6 minutes in at that piano solo was one of the most beautiful things I have ever witnessed. Then to top off a YEM..MIKES SONG!?! A wonderful singalong with a powerful jam ensued.
A special NO THANKS to Sams Champion (especially the singer) for douching up the place - thats not what an encore is for... 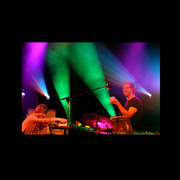